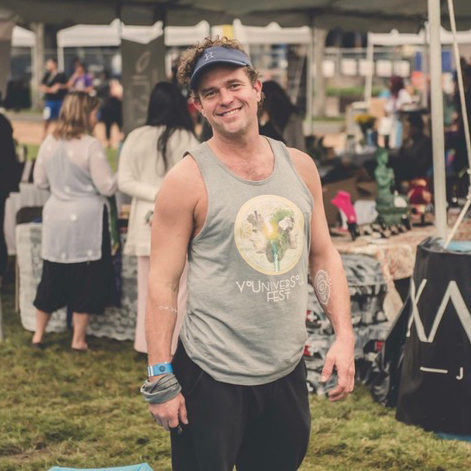 Jonathan enjoys teaching creative, fun, and challenging classes that offer an edge to all levels of practitioners. He loves helping people move past their mental barriers to accomplish new physical achievements. Jonathan enjoys practicing and teaching Ashtanga, Vinyasa flows of all types, Core and HIIT fusions, Yin and Zen meditation. He believes in studying and practicing all eight limbs of Yoga.  His classes will always offer modifications and intensifications to poses and transitions for all levels to enjoy. Jonathan also enjoys practicing arm balances and inversions (especially incorporating them into the flow), Aerial Yoga, and is involved in both the Houston and Texas wide Acro-Yoga communities.

Jonathan started practicing Yoga as a supplemental balance to traditional strength and conditioning, but quickly fell in love, and started practicing daily.   It transformed him in ways he never thought possible on both physical and spiritual levels. After suddenly losing his wife to a rare strain of the flu, his Yoga community became his refuge. His saving grace. He will forever be in debt to those around him who helped him through this tragic loss. Eventually, he decided to pursue teaching as a means to further his practice and give back to the community. Jonathan completed his 200 hour teaching training in the spring of 2017 through Jonny Kest’s Lifepower teacher training program which is an Ashtanga-Vinyasa based program.  Jonathan grew up in Katy, and has been a resident of Sienna for the past 15 years.  He has three children who also love Yoga. By day, he works as Chief  Engineer in an industrial facility. He also enjoys Rock Climbing, Snow Boarding, and hanging out with his kids.

SIGNUP FOR OUR NEWSLETTER AND GET UPDATES ON SPECIALS, EVENTS, AND LATEST NEWS SIGN UP NOW

Afterglow Hot Yoga is more than a workout to make you look good. It will also make you feel good. It doesn’t matter if you’re young or old, skinny or fat, flexible or not … this yoga is for you! If you’re a runner, body builder or play professional sports -adding Afterglow Hot Yoga to your routine will enhance and improve your overall performance. You don't need prior yoga experience and you don’t have to be in shape before you come. Come just as you are today and start receiving the healing benefits that will change your life!
Check out Afterglow Hot Yoga on Yelp